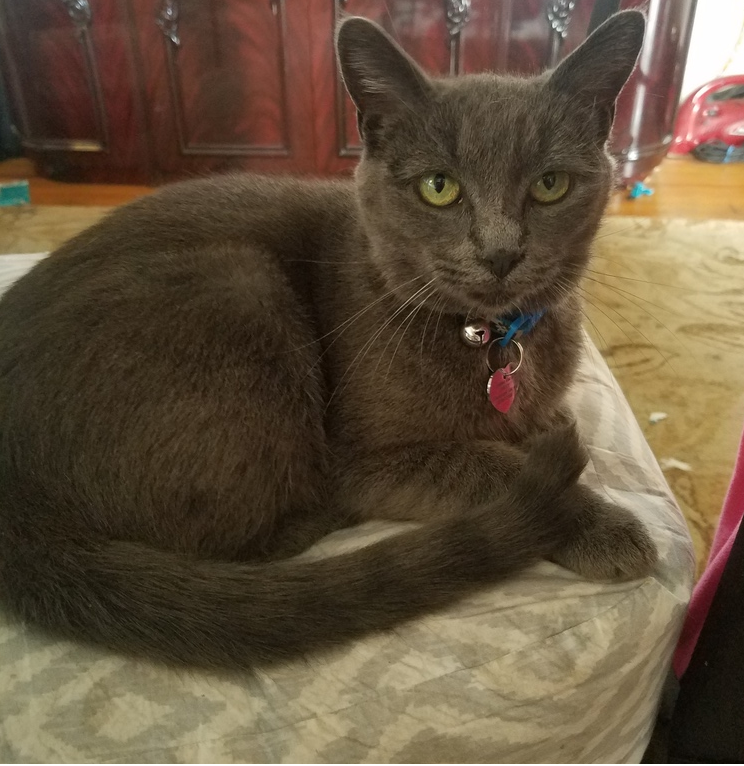 by Charity Yohn,
–– Charity is a software developer in training, an entrepreneur, a parent, and a pet parent. When her hands are not full managing life, business, and school, she likes to garden, read, sew, and cook elaborate meals.

The Break Diver’s Creed is “No Rules. No Excuses. No Regrets.”

Well, about three months ago, we noticed this cat that was coming around the house. My neighbor puts food out for strays, so it was not unusual to see cats around. The difference is that this cat did not run when it noticed your presence. This cat enjoyed letting my daughter pet it and even allowed her to pick it up.

I believe the cat was homeless because the cat started to become a fixture in our back yard. My daughter would play with her regularly, but I always had to remind my daughter that the landlord has a strict NO PETS policy. I had tried to talk him out of this policy in the past, to no avail.

NO RULES — When the weather is nice, I like to leave the back door open to allow fresh air into the house. We live in northeast Pennsylvania and have cold, harsh winters with snow. The house is closed-up much of the year to maintain the heat. I believe the cat needed a home and decided that this would be a great home. The cat started wandering into my house a couple of times a day, despite being put back outside each time. It seemed that the cat would not accept that staying outside was a rule to abide by.

NO EXCUSES — I am not the type of person to purposely scare or hurt an animal, and it turns out, this cat was quite persistent in its quest to move into my home. The cat started coming into the house at every possible chance. No sooner would I put the cat back outside, than it would wander back in as soon as I wasn’t looking. It would not accept that I did not want it in the house. This started to happen 10, possibly 15, times a day. I would put the cat outside, and five minutes later, I would look up from the computer and low and behold, the cat would be sitting on my couch looking at me. The more I put her outside, the more she came back in.

NO REGRETS — Perhaps, this isn’t a point about the cat learning from any mistakes. However, the story ends happily. Due to the cat’s unending persistence, I finally spoke to the landlord and managed to get permission to keep it. We took the cat to the vet and found out that she was healthy. We got her shots and spayed. Although we thought she was still a kitten due to her size, she weighs just 6.5 pounds (2.95 kg), and it turns out, she is three years old. My daughter named her Midnight, though we usually just call her Kitty.

Now she has all the food she could want, toys, and a family to love her. Come winter, she will have shelter from the cold. She chose us and would not give up when I tried to reject her by putting her back outside. We allow her to come and go as she pleases, as she is here by choice, but she pretty much just stays on the porch and “guards her territory.” Nobody has ever claimed her. The cat needed a home. Rather than waiting for someone to let her in, she proactively chose a home and persisted until she was allowed to stay. She would not give up. She took the initiative to change her own circumstances and overcame any obstacles that stood in her way to make her dream a reality.

In a sense, without realizing it, she too is a break diver. That is the tale of the break diving cat 😊.

***Update: Now two months after adopting her, Midnight has gained weight and is reaching a healthy weight for her frame. The vet says she’s looking good. 😊

2 Replies to “The Tale of the Break Diving Cat”